Right now, I know it seems like this blog is all over the place, guitars, rock music and now I’m throwing in some country music?!?!?! Well it’s about to get a whole lot crazier once I throw in Latin, Bluegrass, Classical, maybe a little hip hop and metal.

I wanted to talk about Brad Paisley here, he is one of my favourite current country stars. I like his songs from the cheesy, funny Cigar Song to the heartbreaking Whiskey Lullaby with Alison Krauss to the real reason I think he is great Nervous Breakdown. He can write a song and he can solo like no one else. I know a lot of shredders turn to metal and play as fast as possible but Brad can craft a solo and play just as fast. 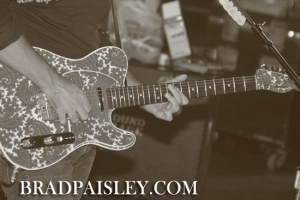 Paisley with his Paisley Guitar

I know I’m a bit late on this but I really like his latest album This is Country Music. It really takes a lot from 70s country music, and even features Alabama and a song called Eastwood. Great album and probably one of my favourite overall albums in country music. I love Westerns and western music and someday soon I going to throw down some Marty Robbins, but until then I put down my top 5 Brad Paisley songs.

I am putting some videos in so you can see the awe.

1. Nervous Breakdown – This is all instrumental but it shows how well Paisley can pick

4. Online – Pretty accurate reflection of who you are probably talking to in a chat room

5.Throttleneck – another instrumental picking song, it reminds me of ghost riders in the sky. If you don’t

know that song go ahead and look up the Johnny Cash version.

On good Morning America; all pictures from Bradpaisley.com 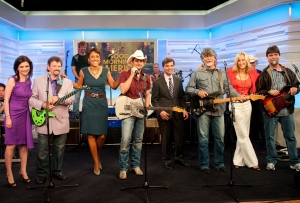