This pedal along with my aqua puss are the only two pedals I need to have. Buying the Aqua Puss over the other delay pedals I was looking at was one of the best pedal  decisions I have made. The other best decision was buying the Blues Driver pedal used at guitar center. I had been looking for an overdrive pedal for a while and I was thinking about this one, along with the Tube Screamer and the Way Huge ones. I liked the Way Huge ones and I would consider getting them in the future but it really came down to the Blues Driver and the Tube Screamer. After playing the Blues Driver I liked it more than the Tube Screamer. I had no idea at the time but it all ended up working out well for my bass.

One thing I love doing is using this pedal with my bass. It’s good for turning up the volume and getting a nice overdriven bass, but it doesn’t lose clarity. I think that is one thing about the Blues Driver I like most of all, the versatility.

When I tested this one out, I used a Gibson SG and it sounded great. That was part of what sold it to me. So make sure when you test out pedal you use something close to your own guitar.

This pedal has the same you find on a lot of overdrive pedals, tone, level and gain. These knobs kind of mimic a simple amp. The tone is for bass or treble boost, the level is the volume and the gain controls the amount of distortion. Actually GFS has a mimic of this pedal and instead of a tone knob there is a switch with three options Rotund, thin and fat. I listened to the audio clips and didn’t hear too much difference among them. You probably have to listen to it in person to get a real idea.

I got this pedal used. So I only paid $50 for it. So far it has been the best used piece of guitar equipment I ever bought.

From what I have read the OD-1 is also a great overdrive pedal. The circuit on that one is more similar to the Tube Screamer and both have a strong mid boost. 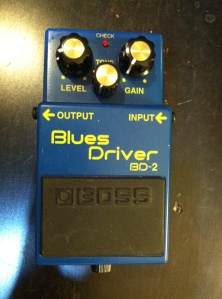 You know that orange pedal. It’s that one. I got this pedal most recently. I like it so much better than my FAB distortion. It has the usual knobs that are on Boss pedals. It has tone, level and distortion. The tone cuts or boosts the highs, the level is for volume and distortion is the amount of amplitude clipping involved. I like to use it when I am playing Judas Priest or Iron Maiden.

One cool thing you can use it for is a clean boost. You can turn the distortion all the way down and use the level to increase the sound. I like this because I have a small bass and I can use the DS-1 to get some good volume out of it.

One of my main motivations for getting this pedal was that my other distortion pedal. The Danelectro FAB is fine if you have very little money like less than $20 to spend on a pedal and I still like it to play Black Sabbath riffs. However, when I connect it in a pedal chain it sounds terrible. Maybe it’s just my set up but I don’t like it. I also got it for free. Also the FAB can’t do clean boost you need to use the gain.

Most of the reviews I have seen say that this pedal is terrible unless you mod it to expand the tonal range. Basically, opening up the pedal so that it has more highs and lows. I guess you can do this mod or send it to Keeley or someone else. I would probably just get a different distortion pedal because you have to spend at least another $60 to get someone to mod it. I guess you can do it yourself for like $20, but then you need a workspace.

Not that this affects the sound but I do like to have another color in my pedal line up to break up the blue ones I have.

If you are thinking about getting a distortion pedal and want to spend less than $40 for a good one I would recommend this one.

I don’t think I am wrong in saying that Boss makes some of the most iconic pedals in the world. I have grown to love Boss pedals and right now I own 2 of them. They make great pedals, they are solid and not overpriced at all. I would say they are at the forefront of pedal innovation. Even my BBE mindbender has a clone of the Boss circuit in it.

I have the Blues Driver which I would say is probably my favorite pedal. I use it with my bass and guitar. I use it with my solid state for obvious reasons, but it also goes well with my tube amp because along with my volume knob I can really get that breaking up Chicago blues overdrive sound I’m looking for and if I want to push it into hard rock territory it is good for that too.

The other Boss pedal I have is the flagship distortion DS – 1. I recently got this on and I like it a lot but not as much as the Blues Driver. It is a really inexpensive pedal and it was one of Boss’s first pedals too. Kurt Cobain, Steve Vai and Joe Satriani used one. What I like to do is use the Blues Driver at a little past 12 o’clock and then put the distortion down low so if I need a little bit more gain I can put on the DS-1. Or I can pile the two on top of each other at 3 o’clock and make it really gritty.

For the most part I love every i have tried by Boss but I passed up the  CS-3 Compressor for the MXR compressor. I still think that was a good idea. I was thinking about getting the Harmonist but every time l listened to a demo of it I thought, no matter what song I play it is going to sound like Boston. I still have yet to try it in person.

I think the new pedals that Boss just put out in NAMM are interesting and the tera echo sounds really cool on youtube.

One thing I usually do when it comes to pedals is I try to stay with the analog option. This is in a way from past experience. I had a G2.1Nu multi effect pedal and it really did not impress me. Some of the problems I had with it were that it had no sustain. When I held a chord out you could hear the gradations. It was not smooth. The other problem I had was that it was so overloaded with setting I would never want to use and the looping pedal was 5 seconds max. That drove me crazy. So I have been really weary when it comes to digital effects.  However, I do think the COSM Fender effects are great and I really like the ’63 spring reverb. So I am coming around on some digital effects.

When it comes to distortion I like Overdrive first, distortion second and then finally fuzz. I know I have mentioned this before but I thought I would say it again.

Neither pedal is clearly modded and I am keeping them that way.