Exciting news! It looks like Gretsch is starting a folk/bluegrass line of instruments. There are a few dobros out, and there is a line of open back and resonator banjos. I can’t seem to find them anywhere but it looks like they are coming soon. I tried calling a few store and it seems like they can order them but most don’t have them in stock. I am hoping that I can play one of them in the next few months.

In case you don’t know who Gretsch is they make some of best guitars in the world. Chet Atkins, George Harrison, Brian Setzer and Duane Eddy are just a few of the many Gretsch player and there seems to be a big upswing in not only Gretsches, but also rockabilly music. It makes me very happy. They all look very retro and very cool.

Here is a link for the roots collection

http://www.gretschguitars.com/products/rootscollection   It’s even made to look Old Timey

Following this, two my next posts will be

My newest guitar a used SG Special, and the upgrades I made to it.

I was recently in Ann Arbor for a graduation and I found Herb David Guitar Studio. As far as guitar stores I’ve been to it is one of the best. I only ended up buying a banjo strap but I tried out a few Reverend guitars. If you are ever in Ann Arbor is highly recommend stopping in. They have jams on Sundays and the staff is very friendly and helpful. They carry a lot of Seagull acoustics and Fender electrics. I only ended up buying a banjo strap there, but I did try out a few of the Reverend guitars they had in stock.  If I ever decide on a Reverend I’m going to get it there.

So I tried out the Reverend Flatroc and it is a damn nice guitar. The one I played had contoured korina body, mini humbucker pick-ups and a rosewood fret board. I was playing it through an orange tiny terror head which sounded great. It doesn’t have a lot, I think just 4 dials but dialing down the wattage gave the Reverend a nice gritty sound. Playing the Flatroc really gave me an appreciation for mini humbuckers. They are really a different sound and I have been looking for minis. The puck ups look a lot like the filtertron humbuckers that Gretch uses. I think that was a smart move because it’s really has that warm country sound I was looking for. I loved the contour of the body it was like a modified Strat contour but the guitar felt very substantial. I think I loved everything about the body from the feel to the retro style.

The only thing I didn’t like was the bound fret board and the frets were too large for me. That is totally a personal preference and its one of the same reasons that Les Pauls and SGs feel weird to me. However, I would chose the Reverend neck over an SG neck any day. I also picked up a reverend six gun and it sounded very close to my telecaster.  Which was great but I would probably stick with my tele. Ultimately, if I hadn’t been traveling by air I probably would have bought the Flatroc.

Here are some links

Since I hadn’t written anything in a while I decided two posts today. Enjoy the second one below.

I have recently been watching a lot of Austin City Limits. It’s been the longest running concert series on TV since 1976 and it is great. A few recent concerts I really liked were Raphael Saadiq and the Jeff Bridges/ Miranda Lambert concerts, also Randy Newman was great. I watch it through PBS like I assume more of America because I happen to live in DC. It is a great music series, and commercial free. It plays a lot of Americana music, so if you are looking to get into Americana just DVR ACL. I find myself looking a lot at the guitars (Jeff Bridges has a great gretsch).

And Photos! All photos come from ACLTV.com 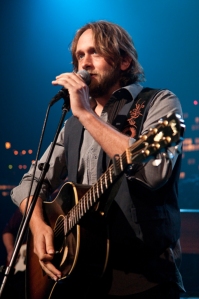 Another music concert series I recommend is the A/V club Undercover series. It has new artists come in and cover older songs. One of my favorites was Wye Oak covering Mother originally by Danzig. I think its really cool to see different takes on well known songs and it also lets me see how different artists interpret songs. There are also bands I haven’t heard of and it helps me decide if I want to listen to them more.  The premise is that the people at the A/V Club have a list of famous songs to cover and then they ask a bunch of bands to come and do a cover. However, once a band covers that song no other band can cover the same song. So as time goes on the list dwindles.

I don’t have any photos for this, but it’s also not as big as ACL